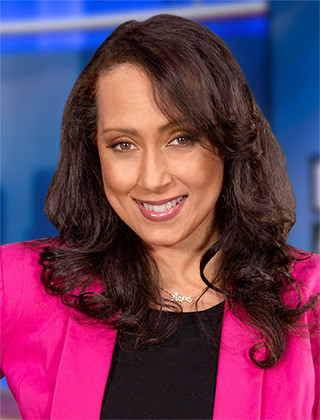 Brandi Proctor is the anchor for FOX45's midday talk show, BMore Lifestyle. The Baltimore native has been with FOX45 News for more than 18 years.

Brandi aggressively worked her way through the ranks in the television world, beginning as an intern with FOX45 while pursuing her undergraduate degree in Broadcast Journalism at Morgan State University. She later became the Associate Producer for FOX45 Morning News as she continued her studies to earn a Master's Degree in Television Management. After sitting on the assignment desk for a few years, and rubbing shoulders with some notable celebrities, she was bitten by the "news" bug and began new and different assignments. Brandi has worn various hats behind the scenes such as managing crews on breaking news events, being instrumental in researching some of the hard-hitting investigative stories, while providing entertaining segments and traffic reports regularly.

In 2015 Brandi had a change of scenery, when she relocated up Interstate-83 to work for FOX45's sister station, CBS21 in Harrisburg, Pennsylvania. She enjoyed working there as the Traffic Anchor and Bureau Reporter. However, after marriage and the birth of her son, her hometown called her back down the road! She returned to her old stomping ground, FOX45, and led the digital team to become number one in the Baltimore market. Brandi took great pride in seeing the viewers that she worked so hard to relay stories to for the broadcast news, following FOX45's online presence as well.

When BMore Lifestyle needed a new host in 2019, Brandi (who thought she was done with on-air duties) knew the show needed her! Assuming the new position, Brandi was humbled by the warm welcome she received in the homes of so many Marylanders every morning. She strives to be her authentic self while offering viewers a light-hearted, informative break from the heaviness of the world and its challenges.

Brandi, alongside Tiffany "Lady T" Watson looks forward to the daily laughs on "Lemme Tell You", enjoys showcasing local talent, businesses, community movers and shakers... and of course, they love "Spillin' the Tea!"

Brandi splits her time between on-air duties and being a member of the FOX45 management team. She is proud to help lead an award-winning group of talented journalists.

Brandi is a proud alumna of Western High School in Baltimore City. She is also a member of the illustrious Alpha Kappa Alpha Sorority, Inc. and the National Association of Black Journalists. Brandi encourages all youngsters to pursue their dreams. She recommends hard work, dedication, networking, and most importantly, internships in order to succeed in the field of communications.

Have a story idea? Send an email to bproctor@sbgtv.com