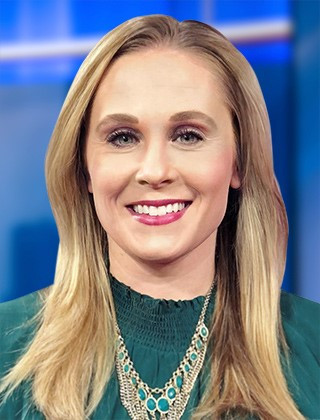 Morgan Adsit is an Emmy award winning sports anchor/reporter who joined FOX 45 in April of 2011 after two and a half years as a sports anchor/reporter at KLRT in Little Rock, Arkansas. Before heading to SEC country, Morgan started her career at WKEF/WRGT-TV in Dayton, Ohio as a producer/sports reporter. While in Dayton, Morgan had a weekly sports feature on female athletes called, She's Got Game.

Prior to Dayton, Morgan attended Ohio University where she graduated from the prestigious E.W. Scripps School of Journalism. At Ohio University, Morgan worked as a sports anchor/reporter for WOUB-TV covering the Bobcats. She also interned at Good Morning America and ABC News in New York City.

Originally from Eaton, Ohio, if Morgan wasn't playing sports she was watching them. Morgan's favorite sport to play is basketball, and she was named All-State and currently holds Eaton High Schools All-Time Scoring Record for basketball. After getting local media attention in Ohio, Morgan decided to pursue a career in sports journalism.

Morgan is thrilled to call Baltimore her home and excited to meet and interact with members of the community. If you have a story idea or want to say hello to Morgan, please send her an email.