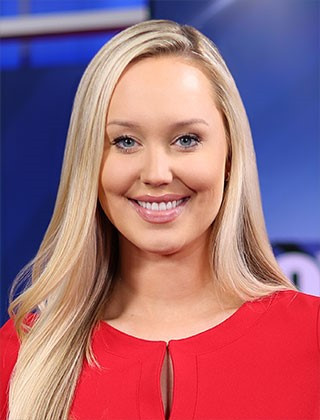 Rebecca Pryor joins FOX 45’s team as a general assignment reporter. Born and raised just up the road in Frederick County, MD, she’s thrilled to finally be back home.

Before arriving at FOX 45, Rebecca spent four years in the Midwest missing crab cakes. Most recently, she worked as a reporter for KOKH-TV in Oklahoma City, OK. Before that, she anchored, produced, and reported for KCAU-TV in Sioux City, IA, which is also where she won a regional Emmy for her team’s award-winning coverage of the historic 2019 flooding.

Rebecca graduated from Shippensburg University with a degree in Communication Journalism. During her undergrad, she wrote for the school’s newspaper, hosted a radio show, and was a member of both the track and volleyball team, winning a total of three conference championships.

In her free time, you can find her bouncing between Raven’s and O’s games, training for her next marathon, exploring new restaurants, visiting Pryor’s Orchard in Thurmont, MD (best peaches in town!), and simply enjoying living closer to friends and family.